Posted at 11:53h in Activities and Events by admin2
0 Likes
Share 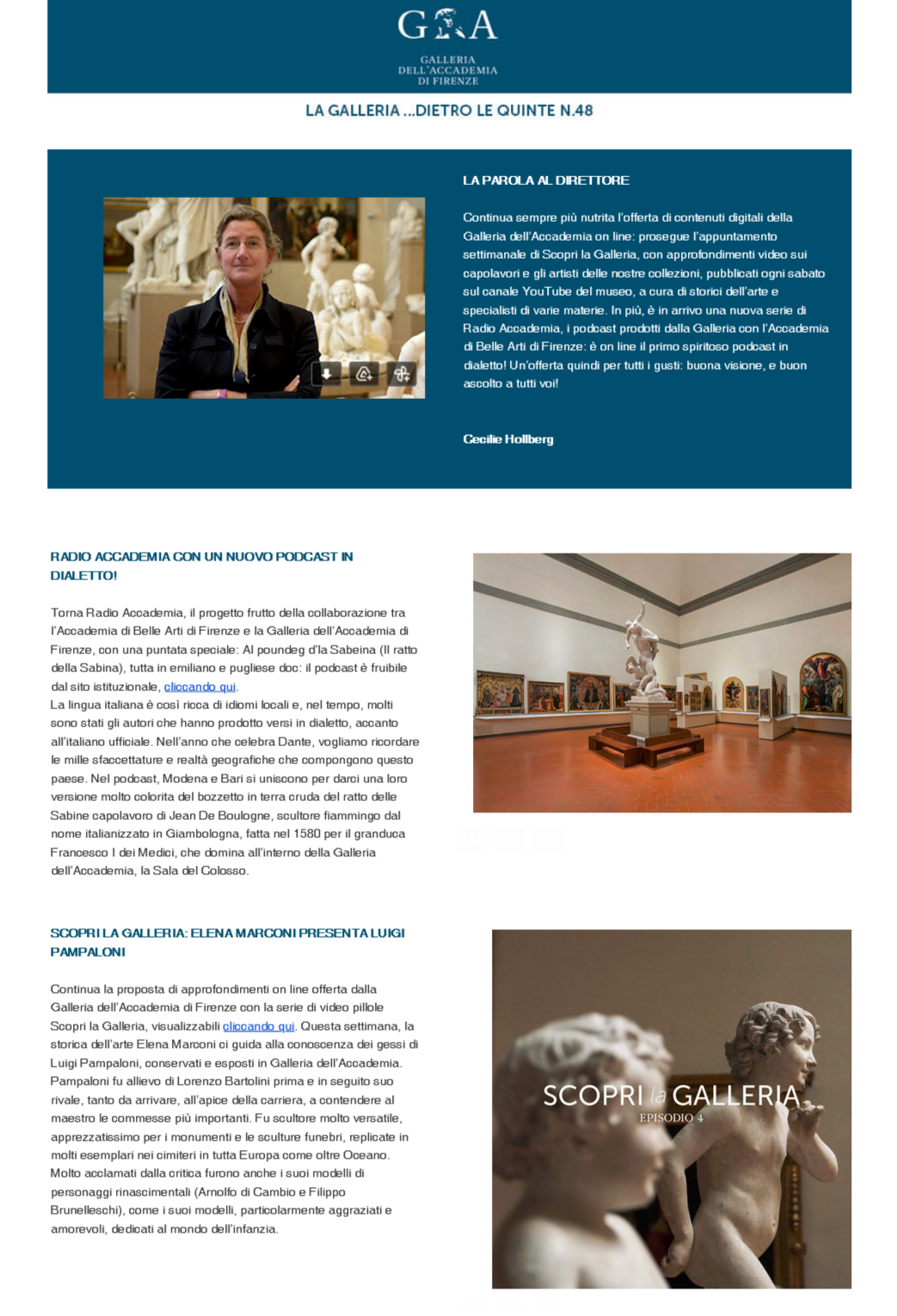 On Saturday 6 March, Michelangelo Buonarroti’s birthday, The Galleria dell’Accademia in Florence will celebrate 4 years since the birth of the Friends of David Association.

The Galleria dell’Accademia in Florence is pleased to celebrate, on Saturday 6 March, the date on which Michelangelo Buonarroti’s birthday is also remembered, 4 years since the creation of the Friends of the Galleria dell’Accademia Association – Friends of David. The association was born in 2017 from an idea of ​​Cecilie Hollberg, Director of the Museum, to support the activities of this important institution, involving young people, Florentines, Italians and many foreigners who love the Galleria: a way for everyone to re-appropriate the Museum, to experience it. Today it has about 350 members (including founding members, ordinary members, adherents and under 28), and it has joined Fidam – the Italian Association of Friends of Museums – since 2019.

“Museums, large or small, need support” emphasises Cecilie Hollberg “And the Association of Friends takes care of the Galleria dell’Accademia, protecting its value. In 2017, with Fausto Calderai, President of the Friends, and a small group of enthusiasts, we were able to bring together the first group of members who has increased in number in recent years. Everyone who was asked to take part in this adventure warmly joined. Together we have carried out many projects and we will carry out others.”

“A solemn but also familiar meeting place” says Fausto Calderai, President of the Association “the Galleria has brought together, in this association, many people of different ages and origins to support such an important museum for the city of Florence. Let’s continue to love the Galleria and soon we will be reunited among the ancestors of all of us!”

Over the years, the Association has carried out multiple activities in different areas of intervention. In 2017 was the donation, acquired in the Museum collection, of the marble bust depicting Giovanni Battista Niccolini, the work by the famous sculptor Lorenzo Bartolini; in the same year the Association collaborated in the organisation of two concerts held in the Galleria: From the Highest Star, by the German ensemble of old music Capella de la Torre, and a Piano Concert by the Russian pianist Igor Levit.
In 2018 and 2019 the Association collaborated in the communication of the main events of the Museum, with two editions of Recenti Restauri – Recent Restaurations (a series of conferences intended to tell the public about the recent restoration interventions on the Museum’s works), two editions of Voci Fiorentine – Florentine Voices (insights into the works in the permanent collections of the Museum by well-known personalities of the Florentine cultural world), I Musei Statali si presentano – State Museums present themselves (a series of meetings aimed at making important Italian museums and their collections known through the stories of the directors themselves); as well as study days and conferences such as the Lorraine Quadrilateral of the Arts and The Dispute over the Immaculate Conception in sixteenth-century Tuscany.
In 2019 our Association was the winner of a CR Firenze competition with the project The Museum Life, which made it possible to finance the work of a restorer inside the Museum for the entire year, for activities such as maintenance, the assistance to the handling of the artworks, and climate control.
Starting from April 2020, following the pandemic and the lockdown, with the consequent closure of the museums, the Association collaborated in the creation of the weekly newsletter of the Galleria dell’Accademia, in order to continue communicating with the public.
Since its birth, it has organised specific activities for its members such as previews, guided tours, concerts and every year on 6 March, on the occasion of Michelangelo’s birthday, a special evening event, including a roundtable on the copyright David, the protected image, and Art between market and museum.