10 Oct Beyond the David

Posted at 12:30h in Activities and Events by admin2
0 Likes
Share 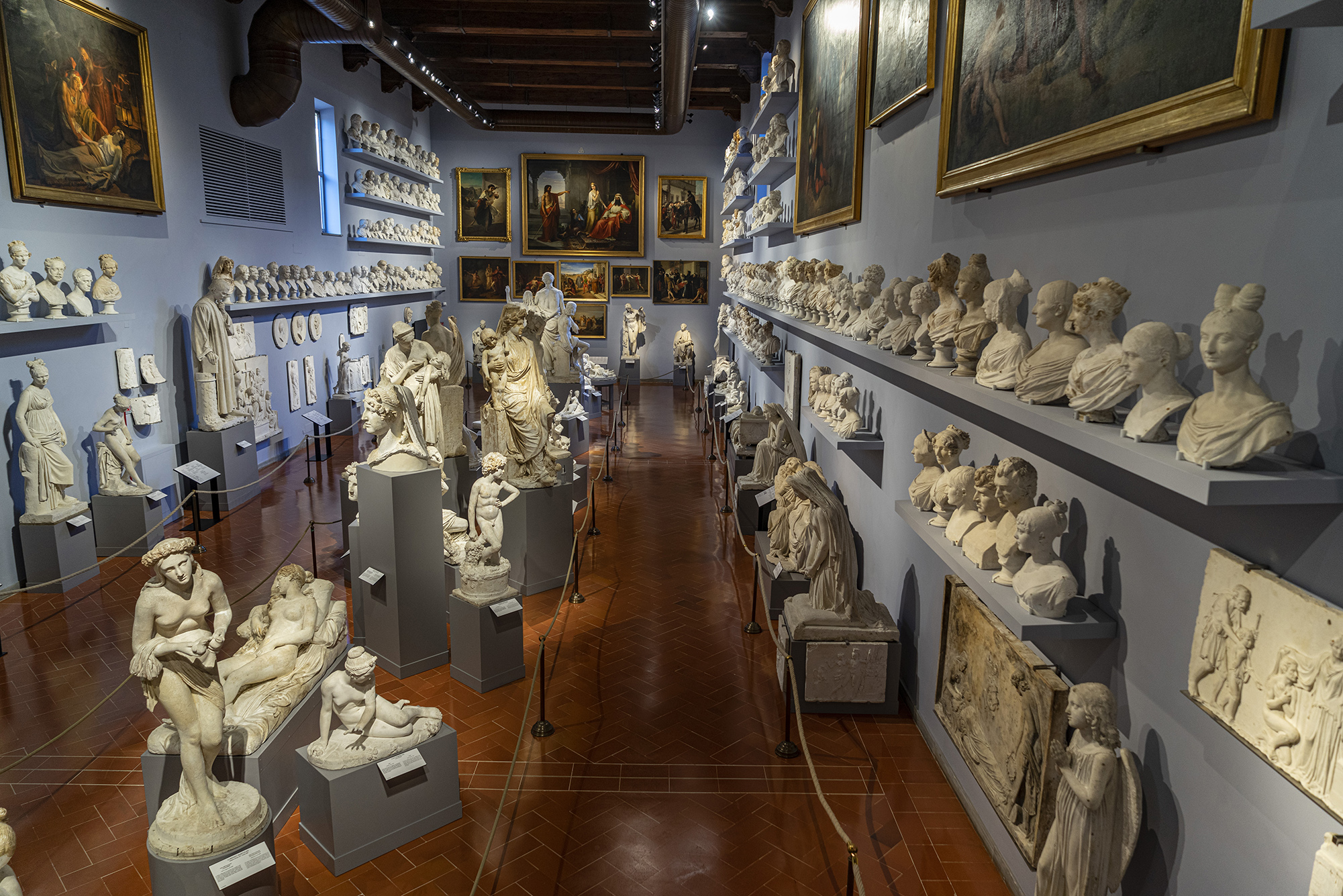 The new Gallery at the Accademia in Florence

After two and a half years of work, a true gem, the Gipsoteca at the Galleria dell’Accademia in Florence reopens to the public with a new look. This completes the major reconstruction project started in 2020. BEYOND THE DAVID is the title with which the director Cecilie Hollberg presents the new Accademia Gallery, underlining that the museum is not only a treasure chest with Michelangelo’s sculptures, loved all over the world, but also testament to important collections related to Florentine art that today finally emerge, stealing the scene even from the David.

“The Gipsoteca is the last and most esteemed step in the renovation process of the Galleria dell’Accademia in Florence,” states Cecilie Hollberg with satisfaction. “A task entrusted to me by the Franceschini reform to bring from the 19th century into the 21st century an unprecedented and modern gallery. A huge undertaking that we were able to complete thanks to the heartfelt and constant commitment of our very small staff and all those who supported us. Despite the many setbacks such as the suspension of museum autonomy, the pandemic crisis, the various criticalities of the structure encountered during construction, we managed to work the miracle. The layout of the Gipsoteca has been changed and modernized in full respect of the historical context and installation, and I thank my friend Carlo Sisi for his invaluable advice. The plaster casts, restored and cleaned, are enhanced by the light powder-blue color on the walls so that they seem to spring to life with their vivacity, their stories. The result is magnificent! We are proud and happy on to be able to share it with everyone. ”

“The reopening of the Gipsoteca is an important step in the path undertaken since 2016 to bring the Accademia Gallery in Florence, one of the most important and visited Italian State museums, into the twenty-first century” declares the Minister of Culture, Dario Franceschini. “The works, concerning the entire building, have allowed significant innovations in the systems, transforming a museum conceived in the second half of the nineteenth century into a fully modern venue without distorting it. All this has been made possible by the passion, dedication and professionalism with which the director Hollberg and all the staff of the Gallery have worked since the establishment of the autonomous museum in 2015, and amid a thousand difficulties and interruptions due to the pandemic. Therefore, I wish every success to this day of celebration for the Accademia Gallery and I extend my sincere congratulations to all those who worked to achieve this important result. ”

“The Gipsoteca of the Galleria dell’Accademia – underlines Carlo Sisi, President of the Academy of Fine Arts in Florence – is an exemplary restitution, which in respecting the previous setting conceived by Sandra Pinto in the 1970s is configured as a true critical act, a museum intervention that preserves a crucial episode of national museography, renewing the compositional structure and grace of the details with methodological intelligence. The new color chosen for the walls makes it possible to recover the correct reading of the works, now exhibited in their completeness, and the removal of the obsolete air conditioning units allows you to admire the sequence of works without disturbing interruptions, now, with the ‘poetic’ continuity that can finally attract the visitor to what in the nineteenth century was called the adventure in the atelier “.

The monumental hall from the nineteenth century, formerly the women’s ward in the former hospital of San Matteo and later incorporated into the Academy of Fine Arts, brings together the plaster collection that encompasses over 400 pieces including busts, bas-reliefs, monumental sculptures, original models, many of which are by Lorenzo Bartolini, one of the most important Italian sculptors of the 19th century. The collection was acquired by the Italian State after the artist’s death and moved here following the Florence flood in 1966. The space permeates with a charm that ideally recreates Bartolini’s studio and is enriched with a collection of paintings by nineteenth-century masters who studied or taught at the Academy of Fine Arts.

The interventions were essentially static-structural in nature, focusing on the air conditioning system and lighting and electrical systems. For static and climatic stability reasons, a number of windows have been closed allowing the new installation, with the walls painted in a “gipsoteca” powder-blue color, to regain a large exhibition space and allowing the Gipsoteca to also house those plaster models that were hitherto kept in the Gallery’s administration offices. Renovated and expanded, the shelves accommodate the portrait busts that for the first time could be secured thanks to a safe and non-invasive anchoring system. During the renovation works, the fragile plaster models underwent careful conservative examinations and dusting. A detailed photographic campaign was carried out on all the works.

The major construction began in 2016 and included research and preparation phases, thus creating documentation and floor plans that had not previously existed. It was necessary: ​​to bring the safety system up to norm, renew the engineering in the building systems, carry out the architectural-structural restoration of the Gipsoteca, consolidate or replace the dilapidated eighteenth-century wooden trusses in the Colossus Room; intervene on the ventilation and air conditioning systems, which was totally lacking in some rooms or was 40 years old in others, and to provide adequate lighting. The works expand over 3000 square meters of the museum. Seven-hundred and fifty meters of ventilation ducts have been replaced or sanitized and 130 meters of ducts have been refurbished. Now, for the first time, the museum has a functioning air conditioning system in every room with new, state-of-the art LED lights that enhance the works on display and contribute to energy efficiency. According to the needs, treatments were undertaken on all the works in the museum: they were changed, protected, packed, moved, dusted, reexamined, or other. In-depth photographic campaigns, both conservative and digitization, were carried out on all the collections. Museum routes and installations were rethought.

The Hall of the Colossus opens the exhibition route with its beautiful Accademia-blue walls, centered by the imposing Abduction of the Sabines, a masterpiece by Giambologna around which the magnificent collection of Florentine painting from the Fifteenth and early Sixteenth centuries revolves. This is followed by a new room dedicated to the Fifteenth century, housing masterpieces such as the so-called Cassone Adimari by Lo Scheggia or the Tebaide by Paolo Uccello, finally legible in all their wonderful details. The Galleria dei Prigioni to the Tribuna del David, the fulcrum of the museum, hold the largest collection of Michelangelo’s works, now enhanced by the new lighting rendering every detail and every mark on Michelangelo’s “unfinished” surfaces visible. Works are placed in context with the large altarpieces of the Sixteenth and early Seventeenth centuries, testament to Michelangelo’s influence on his fellow countrymen in their quest for the new spirituality of the Counter-Reformation. And finally, the Thirteenth and Fourteenth century rooms, where the gilded backgrounds on the paintings shine with a brightness never perceived before on the walls now painted in a “Giotto” green. Today the Galleria dell’Accademia in Florence has changed its face, it has a new strong identity. 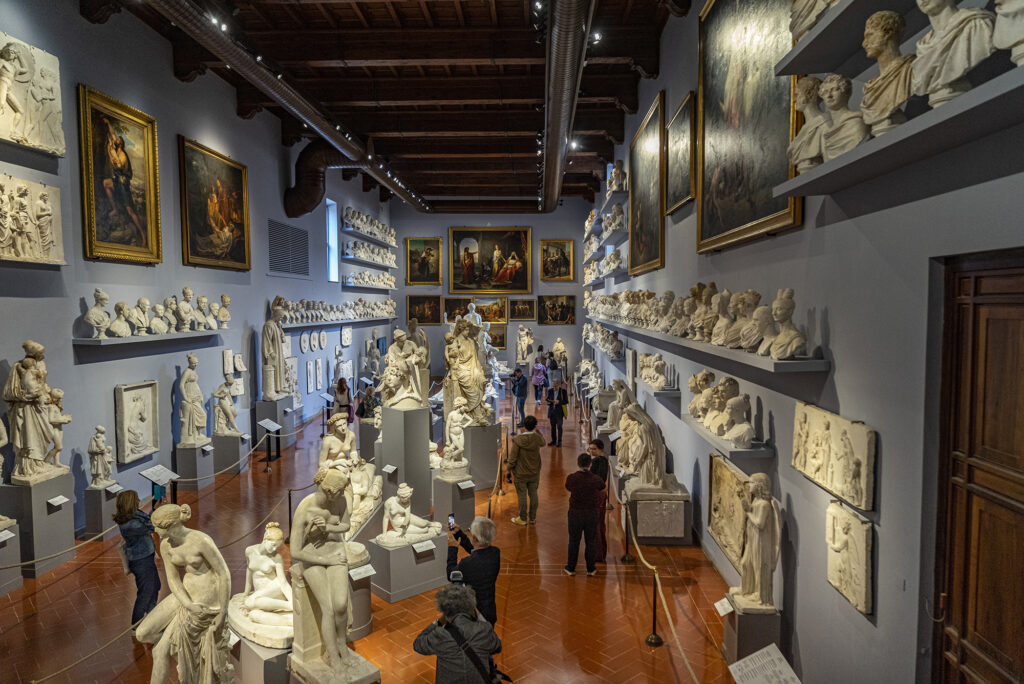 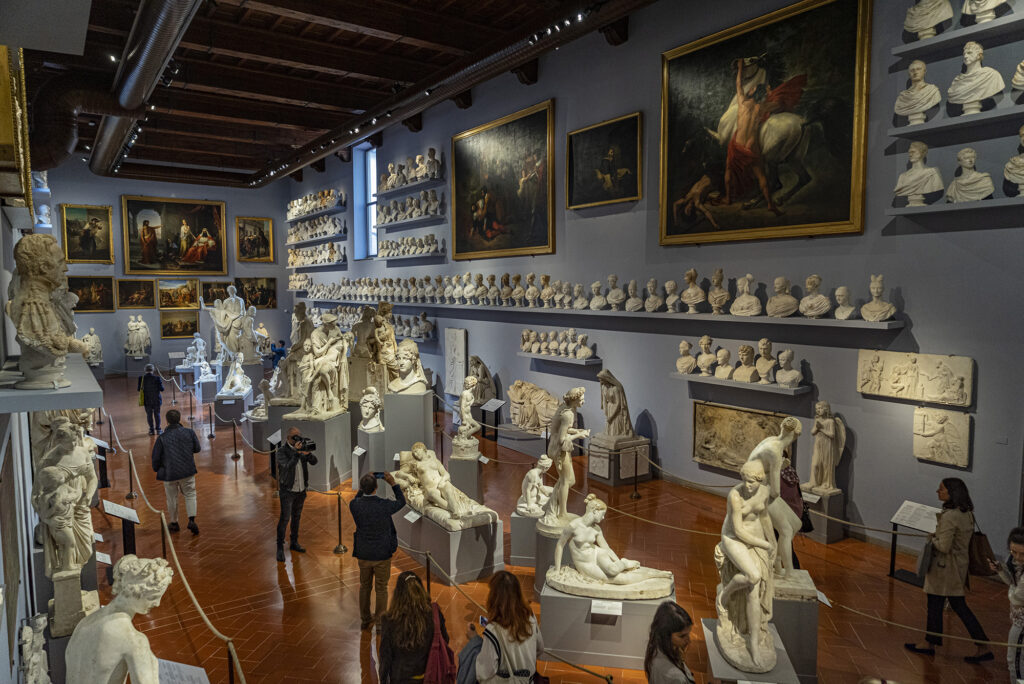 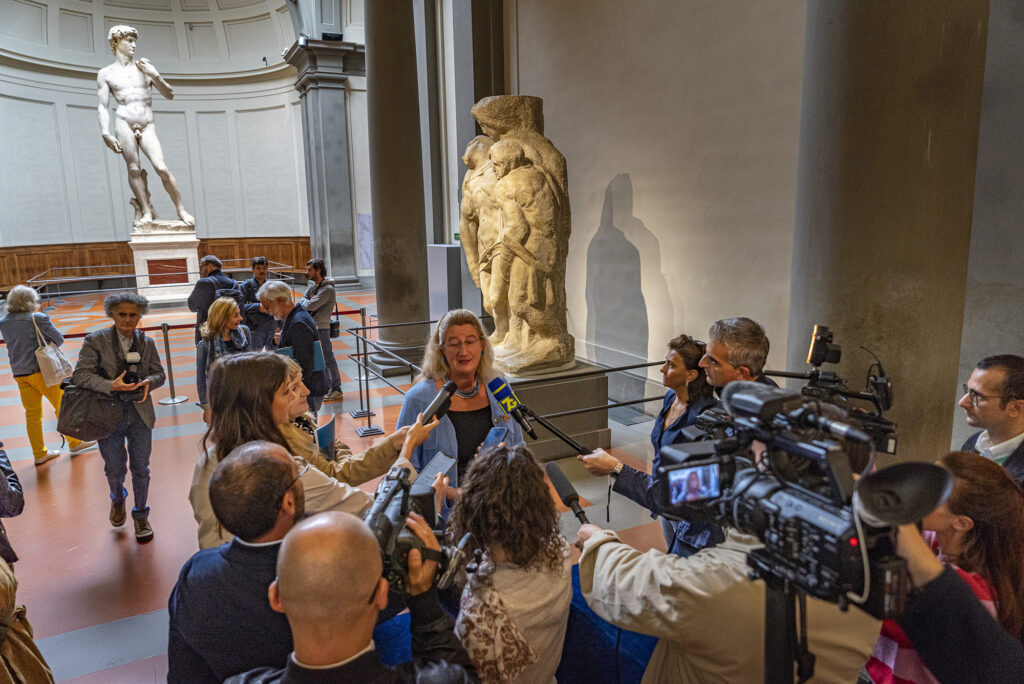 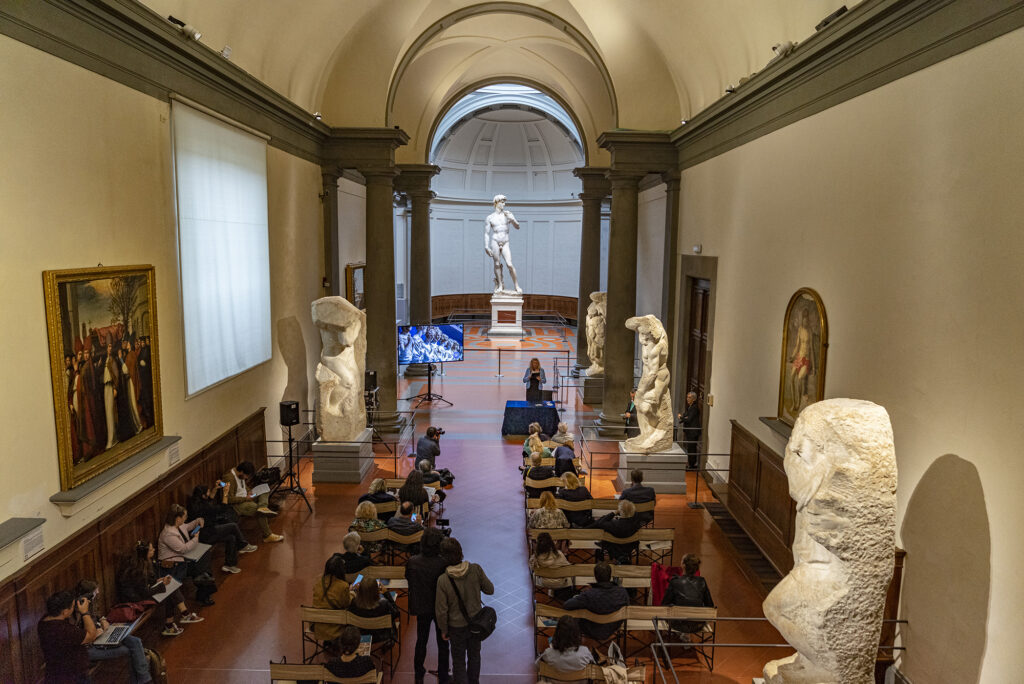 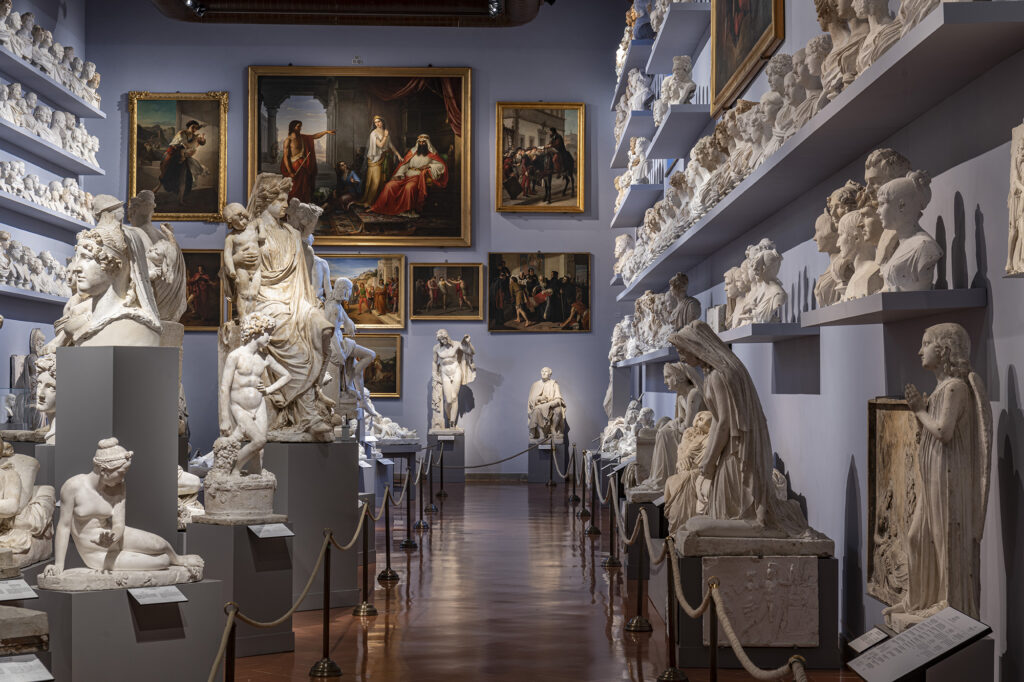 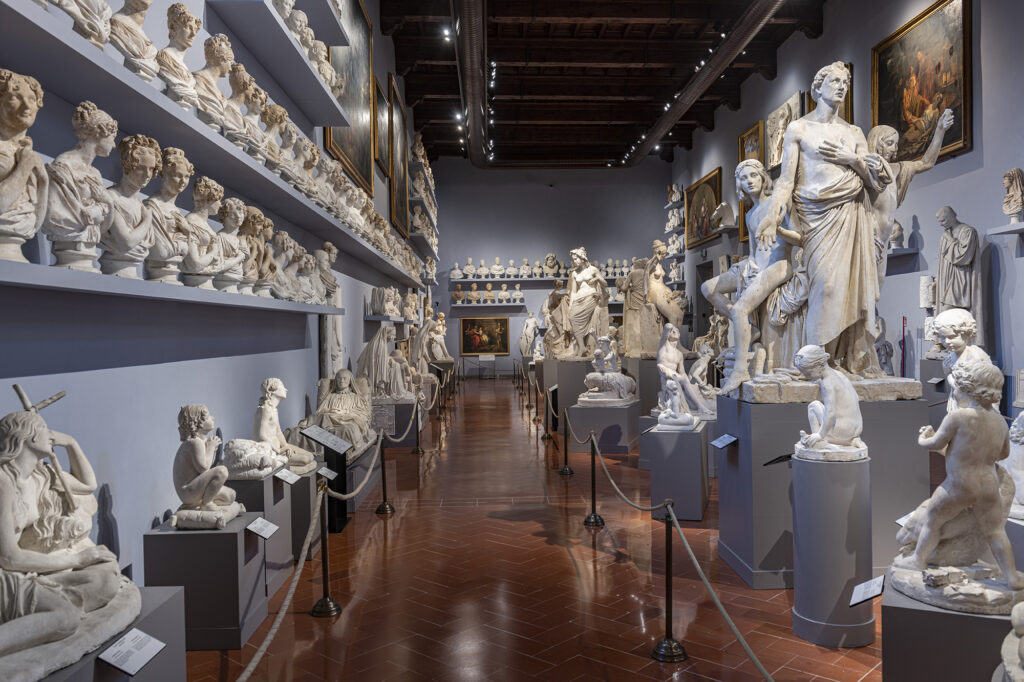 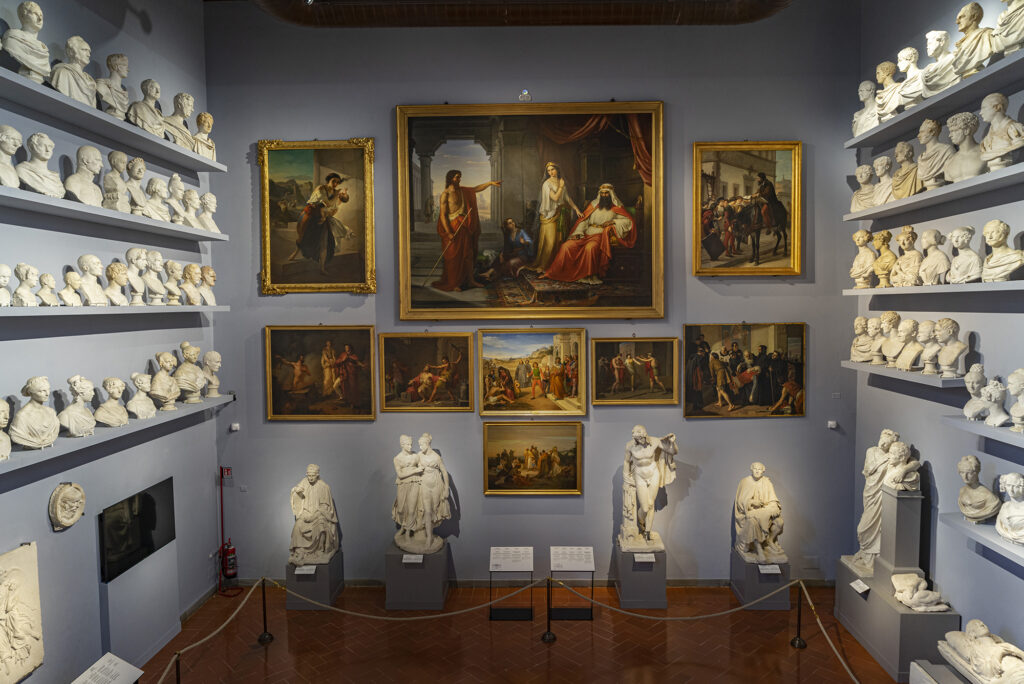 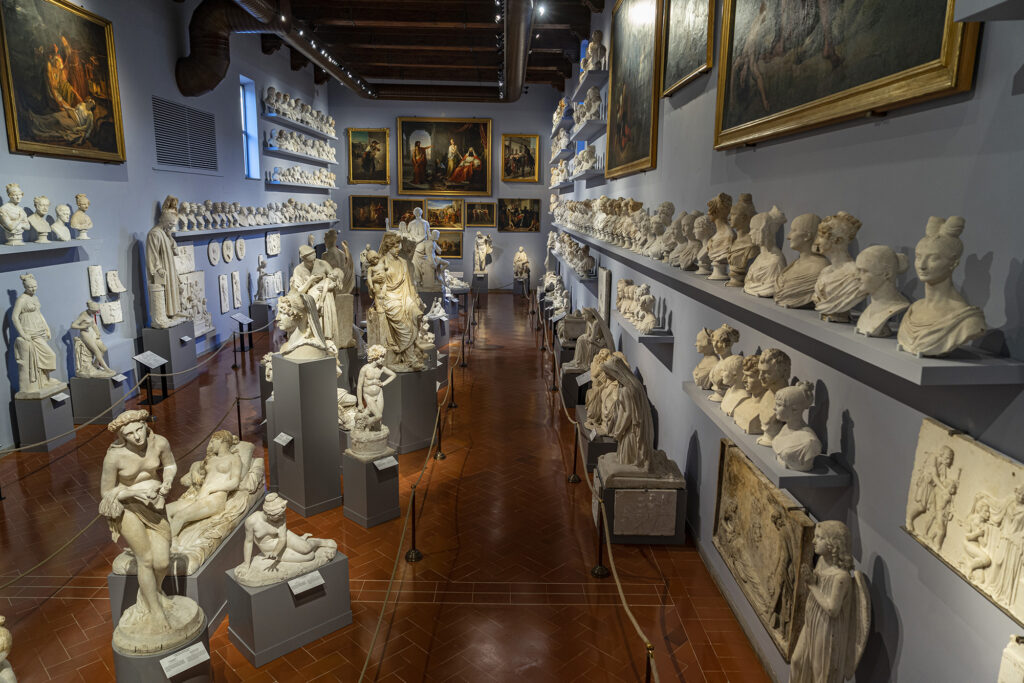